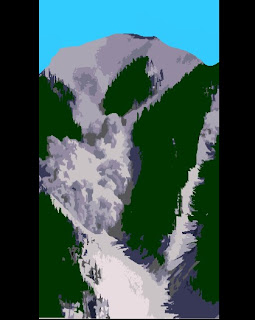 In the first three months of 2009 twenty-four people, mostly snowmobilers, died in avalanche’s in British Columbia mountains. Frequently the sportsmen caused the avalanche that took them out by driving up the proverbial slippery slope. Slippery slopes are everywhere. In my opinion, consensus reality is one of the slipperiest slopes of all. We’re all dying from it.

While researching information for my upcoming book Almanac of the Infamous, the Incredible and the Ignored I discovered a vast army of self-proclaimed experts ready to espouse their opinion on a variety of unexplained mysteries, based on ... their opinion. No matter what the topic, each expert was certain that his input was the final word on the subject.

Now we all know that statistics and data can be manipulated to support any idea at all - we do all know that don’t we? Take for instance the Shroud of Turin. Every second year or so a new study is released verifying that it IS or IS NOT genuine. Ditto reports on UFOs, sasquatch and various other phenomena. Let’s take fish falls for example, an occurrence not as rare as you may think.

Fish falls are when a certain type of fish, usually one type of species, fall from the sky, raining down on the people below. Experts attribute these ‘falls’ to water spouts; mini tornado type affairs that suck up water from an ocean or lake and drop it onto land. I’m sure that this happens however I am also sure that water spouts are not always responsible for this mysterious event. Where are the weeds, dirt, rocks and various other debris and fish species that would be picked up with the fish the fall?

What about the Kentucky Phenomena, where flakes of meat fell from a clear sky covering an area one hundred feet by fifty feet. The ‘experts’ explained this away by stating that it was caused by vomiting vultures flying over head. No one saw the birds and the experts did not bother to say how many of the beasts it would take to barf up the amount of beef that lay below.

“When facts are few, experts are many.” - Donald Gannon
Posted by Juanita Rose Violini at 6:19 PM