There comes a time when an author has to admit that a manuscript just isn't working out. When that time comes, the kindest thing to do is kill it, quickly and with finality.
I had an idea that I thought was really cool, but I had a lot of other things going, so I worked on my "cool" thing in bits and pieces. It took a couple of years, but I finally got it done and started what I always do, reading it aloud.
It stinks. There's way too much repetition; it takes forever to get to a bit of excitement; the characters talk too much; and there are places where I need a Greek god to come down from Olympus and fix the plot.
So what should I do?
I'm going to kill it, or at least cryogenically freeze it until some date in the future when it can be thawed and perhaps revived. That's the nice thing about writing, I guess: dead doesn't always mean dead, it can be "mostly dead," a la The Princess Bride, which means it's possible that someday, my manuscript will become a movie starring Andre the Giant--no, wait. He's dead.
Posted by Author Peg Herring at 4:51 AM 0 comments Links to this post 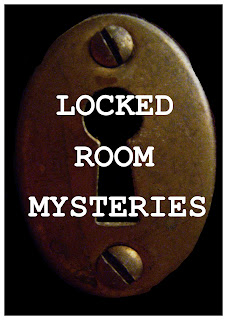 "The locked room is an exercise in illusion - a magician's trick. Otherwise it's impossible, and the impossible can't be done, period. Since it had been done, it must be a trick, a matter of distracting attention, and once you know what you're really looking for, the answer is never hard."
- Michael Collins Nobody Likes To Be Played For A Sucker

The above quote comes from a short story by Michael Collins carried in a locked room anthology edited by Edward D. Hoch. The solution to Collins 'locked room mystery' is one of the more ingenious and believable ones in the book. Locked room mysteries are a lot of fun!
Posted by Juanita Rose Violini at 7:40 PM 0 comments Links to this post

As a writer of crime fiction and a lover of true crime, I'm always excited to locate new, credible sources of information.

Online news services not only entertain me with their crime stories but also provide links to other great sites.

I recently uncovered this cool link to Canada's spy laws. Security of Information Act  which was posted in conjuction with newstories about recent spying allegations against a Canadian naval officer in Halifax and the apparently-related departure of Russian Embassy staff.

This link will join my list of other favourites that includes this one to RCMP Reports  on such things as crimes, criminals, gangs, drugs, and law enforcement.


Posted by Eileen Schuh: at 1:39 PM 0 comments Links to this post

Readers of this review should be aware that this press has published some of my crime fiction and I am acquainted with the publisher, though not with the two authors writing under a single pseudonym.

The protagonist is named Irene Adler. Not the woman who beat Sherlock Holmes at his own game, her modern namesake, a Doctor of Philosophy in Anthropology at Boston University. Adler has a demi-cynical outlook on life and it turns out she supplements her income by playing poker; specifically Texas Holdem in the gambling parlors around the New England area. Irene Adler is a bright, smart, single woman, an endearing protagonist.

Her former advisor, a fellow faculty member, prevails on Ms. Adler to travel to Nepal to inquire into the life and times of a former fellow undergraduate student of Irene’s, a Margot Smith, who’s in Nepal doing research on one of that country’s goddesses, one Chwwaassa Dyo. The problem is that there appears to something awry with Margot and her physician husband and Adler is supposed to sort things out. What needs sorting turns out to be only part of the story. Irene agrees to go half-way around the world to see a woman she barely knows. From this most unlikely beginning, the plot drives poor Adler into one complexity after another.

Her assignment clearly has unstated dimensions about which neither we readers nor Irene Adler herself are clear. Now, Nepal is an exotic nation from which assaults on Mount Everest are mounted and the ubiquitous Sherpa play an important part, as do digital cameras, former Cold War adversaries, political unrest in the country, and a whole series of meddlesome individuals who seem to still show up on the fringes of the former English Empire.

The novel winds its way through a variety of conflicts among wanderers, a boorish American tourist couple, and murder and bomb blasts. At times the narrative suffers from a pedestrian pace and some lapses of editing discipline over the point of view. Still, the story is interesting, Irene is definitely a character to build a series around, the exotic setting in and around Katmandu is, well, exotic, and a satisfactory conclusion is fashioned. I think four stars in too strong a rating, but the novel is more enjoyable than three stars would indicate. Sample the novel and make your own judgment.

--
carl brookins
www.carlbrookins.com
agora2.blogspot.com
Posted by Chris Redding at 10:43 AM 0 comments Links to this post


The Pot Thief Who Studied Escoffier
J. Michael Orenduff
The Pot Thief books are known for making the reader hungry and this one is no exception. Herbert Schuze, better known as Hubie, is hired to design and make the prototype for  chargers (better known as plates) for a brand new restaurant soon to open in Santa Fe, New Mexico. The hitch is the Schnitzel restaurant is going to focus on Austrian cuisine.
From the beginning nothing seems quite right, from the owner to all the quirky people hired to cook and serve. Hubie gets to know these people better than he’d like because he must do his pottery work in the restaurant while preparation for the grand opening are underway. The cooks are trying out all the new recipes and everyone must try them out. None sound appetizing, and most of the time Hubie sneaks away to find more appealing meals elsewhere.
For followers of the Pot Thief books, Hubie makes plenty of trips back home and to Dos Hermanos Tortilleria in Albuquerque to discuss the happenings and the employees of Schnitzel with his friend, Susannah, over margaritas and chips. In between, he reads about the life and times of Escoffier.
The opening of the Schnitzel is disastrous. Austrian food is not a hit with the epicureans of Santa Fe. The descriptions of the menu items were explicit enough for me to know I would never try them. Never fear though, Hubie does plenty of cooking and eating of much more tantalizing dishes.
Though I haven’t mentioned it yet, there is a murder and of course Hubie is the prime suspect. Along with the quest to find out the true murderer, Hubie is romanced, threatened, creates new dishes, bar tends, attempts a bit of burglary and safecracking, and is nearly murdered. As with all the Pot Thief books, plenty of subtle humor abounds, and Hubie enjoys his Gruet Blanc de Noir.
There’s much to love in The Pot Thief Who Studied Escoffier. It has all the elements that endeared readers to Hubie and this series, good food and drink, unusual characters, great settings, a puzzling mystery and plenty more. Though I recommend that all the books be read, each can be read as a stand-alone.
Rather than stars, I award it 5 chilies. Red the book and you'll know why the subsitution.
At my request, the publisher sent me an ARC of this book.
Marilyn Meredith, Author of Angel Lost and Bears With Us.
Posted by Marilyn Meredith a.k.a. F. M. Meredith at 3:50 PM 0 comments Links to this post