Review: Murder Has No Class

Murder Has No Class

Tired of the daily news of the world? Read too many grim thrillers or suspenseful detective stories lately? If you are looking for a change of pace, for an amusing, diverting traditional mystery in the best of the cozy fashion, I give you Rebecca Kent. Author of more than twenty-five novels, this one is set in the Cotswolds of Edwardian England when women sought sufferage and the keepers of tradition sought desperately to rein in rabunctious but upper-class young women.

The novel is set at the Bellhaven Finishing School, run by Headmistress Meredith Llewellyn, with the assistance of a staff of tutors. Llewellyn’s tasks are complicated by her extra-sensibility to the ghost of a hanged man who demands her attention to prove his innocence. Meanwhile, some of the girls and some of the servants are anxious to prove their support for the burgeoning suffragette movement in England.

Ms. Kent has got pretty much everything just right. The characterizations, the tone, the emotional turmoil are all in precise keeping with the time and with the story. The principal characters are classy and distinct and any reader tuned in to the traditional mystery will have a pleasurable experience with this novel.

The REAL criminal mind at work is...

I must get a MRI done...on  my characters' brains.

If criminal behaviour is linked to physical causes, how effective is punishment going to be?  How sane is it for society and victims to feel anger toward aggressors?  Should we no longer blame poor parenting and/or poverty for producing criminals?  Are violent perpetrators victims themselves...of brain malformation and/or malfunction?

Is there anything at all we can do to prevent criminal behaviour?

Check out my popular article I met a man with empty eyes . It's a true account of my chilling encounter with a pyschopath.  The criminal mind--always very fascinating.
Posted by Eileen Schuh: at 4:02 PM 2 comments Links to this post

Email ThisBlogThis!Share to TwitterShare to FacebookShare to Pinterest
Labels: a criminal mind, books on the brain, criminal behaviour, psychopath, sociopath

I'm not sure how it happened. My editor sent me a link, and before I knew it I was teaching a workshop called "Edit or Die--of Embarrassment". It should be fun, although my tech"not"ogy makes me a little apprehensive about interacting with students online. Still, the site operators seem efficient and helpful.
Savvy is a site for authors and would-be authors to learn about both the business and the creative sides of writing. I'm not an expert on the site, but it appears to have lots of stuff going on all the time.
I plan to share specifics on how to edit, gleaned from my years as an English teacher and my own blood, sweat, and tears over my work the past decade or so. Here's the link: http://www.savvyauthors.com/vb/showevent.php?eventid=1212
If it's a pleasant experience, I'll let everyone know, because the "pay" Savvy offers is free advertising. Who couldn't use some of that?
Posted by Author Peg Herring at 5:09 AM 1 comments Links to this post 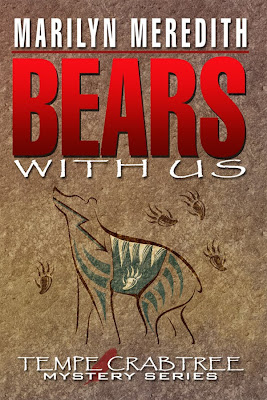 This is the latest in my Deputy Tempe Crabtree mystery series, Bears With Us, published by http://www.mundania.com/

In this latest offering, Native American Tempe, who is the resident deputy of the area in and around the mountain community of Bear Creek, is faced with the scary task of chasing bears from the school yard, out of an apple orchard and people's homes.

This tale was inspired by my grandson, an Aspen CO police officer who spent one fall chasing bears away from living areas.

Of course the tale isn't just about bears but I enjoyed weaving the rest of the plot around the bears and when they turned up.

For the rest of August, my publisher is having a sale and any trade paperback or e-book is available for a great discount. Visit the site and see what is being offered.

Posted by Marilyn Meredith a.k.a. F. M. Meredith at 3:57 PM 0 comments Links to this post

Review: John Wayne Gacy: Defending a Monster  Sam L Amirante & Danny Broderick (Skyhorse Publishing)
I write crime fiction but I love reading True Crime.  Amirante and Broderick’s John Wayne Gacy: Defending a Monster is right up there with Anne Rule’s books—in my opinion.
Amirante was Gacy’s lawyer and tried valiantly but unsuccessfully to mount an insanity defence for his client.  While most of us know the story of Gacy’s horrendous murdering spree, this book provides more than enough behind-the-scenes information to hold a reader’s interest.
While remaining very respectful of both his client and Gacy’s victims, Amirante and Broderick masterfully spice the drama with low-key humour—aimed mostly at the lawyer’s novice self at the time, and the bizarre circumstances surrounding the case and the trial.
The writing is powerful, clean, and well-paced. It avoids the technical and detailed explanations that often bog down a true crime story and gets right to the interesting part—the people behind the story.
Amirante/Broderick fearlessly cast the villain into the limelight—readers with an avid interest in the criminal mind will come away satisfied that they now know much more about the mind and soul of John Wayne Gacy and the people whose lives he so radically changed.
This book is due for an August release.
Upon invitation, I submitted questions to the authors and will be posting that interview soon.

As a young psychiatric nursing student I, too, encountered criminal minds.Click here to read my article I met a man with empty eyes

Enjoy my Crime Adventure THE TRAZ

Soon available in paperback, too.
Posted by Eileen Schuh: at 2:46 PM 0 comments Links to this post