New release: SHADOW MASTERS: An Anthology from The Horror Zine 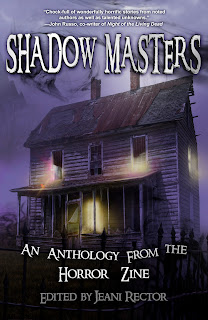 Imajin Books is proud to release SHADOW MASTERS, a new horror anthology by some masters of suspense, along with some new talent in the genre. I am especially excited about this release as it includes all original, never-before-published shorts stories, including mine, DREAM HOUSE.

Featuring a haunted house cover designed by cover artist extraordinaire, Ryan Doan, SHADOW MASTERS has released to rave reviews, including a major plug from NIGHT OF THE LIVING DEAD co-writer, John Russo, who says, “This anthology is chock-full of wonderfully horrific stories from noted authors as well as talented unknowns.”

Fear casts a long shadow, and shadows take many shapes…

From classic horror and exciting suspense to Twilight Zone-type speculative fiction with twisted endings, SHADOW MASTERS: An Anthology from The Horror Zine delves into the darkest corners of our nightmares and delivers the shivers.

And here's a sneak peek at my short, DREAM HOUSE...

The day we moved into our dream house was the beginning of our nightmare. And it all started with five fortuitous words…

“I want my dream house,” I told my husband.
We stood in the poor excuse of a kitchen in our rundown Boston bi-level. I was stuck between the open oven door and a cupboard on the other side, while Ray unloaded the dishwasher and tried not to bump into me.
“This kitchen is ridiculous,” I said. “Whoever designed it must have been a size zero anorexic who lived on her own.”
I was neither a size zero, nor an anorexic. I wasn’t willing to give up my bacon cheeseburgers and DQ Blizzards. So the scale tipped a little further—not in my favor. Oh well.
“Two weeks, Christine,” Ray said. Then his psychiatric training kicked in. “Are you sure you’re not substituting the new house for something else?”
“I just want space. If that makes me crazy, then…” I shrugged, “so be it.”
Fact is, I’d fallen in love with the idea of buying and renovating an old home. You know, one of those period mansions with hefty wooden doors and arched hallways. Where the ceilings are ornate...

* * *
SHADOW MASTERS: An Anthology from The Horror Zine, edited by Jeani Rector, is now available in ebook and paperback editions.

The Kindle edition is ON SALE for a limited time for only $0.99 USD.


Although in the usual sense of the phrase, there are no ‘crimes of passion’ in the two novels in my YA BackTracker Series, THE TRAZ and FATAL ERROR have plenty of crime on their pages. The passion, perhaps, rests mostly with me.

Since I first began writing the series, I’ve been obsessed with the characters and their stories and, once the novels hit the bookshelves of the world, I became obsessed with enticing people to read those stories.

Teen crime is no secret to front-line workers like teachers, social workers, and law enforcement officials. However that street children exist, juvenile gangs terrify neighbourhoods, and nefarious adults take quick advantage of at-risk kids are facts not well known by the general public.

It comes as a surprise to some that juvenile gangs exist within their own communities, that youngsters as young as nine or ten are living well outside the realm of adult influence, and that at-risk kids are not confined to those in poverty or those who are members of a minority group.

THE TRAZ, with 13-year old Katrina as its young protagonist, caters to the reading and interest level of adolescents, but its message is meant for the adults in their lives as well. It is easier to prevent your child from slipping into an inescapable life of crime and addiction if you’re aware that the risk is there, if you can talk knowledgably to your child about those risks, and if you can spot the warning signs.

Just by virtues of their age, all adolescents are “at-risk”. Driving their behaviour are blasts of new hormones, increasing independence, a propensity to depression, their strong need to belong, a lack of insight, an inability to foresee the results of their actions, a blind trust in adults, and their overall lack of experience (but intense fascination) with the adult world they’re entering.

Because THE TRAZ speaks to teens about real life issues and dangers, it has found its way onto the library shelves of Canada’s northern young offenders facilities, youth shelters, and alternate education classes. Its Teaching Guide encourages critical thought about decisions faced by youngsters and provides valuable information on issues such as suicide, depression, guilt, gangs, and drugs. It is also a great tool to kick-start conversations between adults and teens.

To help both adults and children, THE TRAZ also includes a list of addresses, phone numbers, and online links to international resources for those seeking help or information on the social issues touched on in THE TRAZ.

I invite you to join me in my passion; it may save a life from destruction.

From May 3-10 THE TRAZ School edition eBook and THE TRAZ paperback are on special from Amazon.