MURDER IS MORE FUN WITH AN ACCOMPLICE

That crime can be funny is something she's proven time and again. And  Campbell fans can rejoice-- there's a new book out with her name on it...along with that of an accomplice.

Guesting today on Criminal Minds at Work to introduce that new release is author, Melodie Campbell! 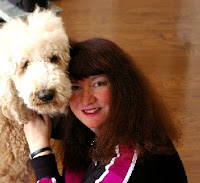 To the woman with the stroller who stared with horror, and then wheeled her toddler frantically away toward the exit…

False Alarm Alert: The two middle-aged women whispering about
murder in the Orangeville library were not fiendishly plotting how to do away
with a tedious husband.

They were writing a murder mystery!

I’m perhaps best known for writing the mob comedy caper series, The Goddaughter. But I also write classic whodunits with my close friend CynthiaSt-Pierre.  Our first book, A Purse to Die For, was great fun towrite.  And happily, it was a Top 100 Mystery on Amazon.com.

Our second, A Killer Necklace, is just out.

Thing is, I live in Oakville and Cindy lives two hours away in Newmarket.

Much of what we do is by email and Skype.  But every few months we like
to get together to hash out plot problems in person.  This means meeting
somewhere in between, like Orangeville.  And where better, than at the
place we feel most comfortable, that hallowed home for books, a library?

But my apologies to the patrons we may have alarmed.  I can imagine the
dinner conversation at several houses in Orangeville that night.

Which brings me to the question asked here:  Why write with a partner?

Simply put, it’s FUN!  There is someone sharing your lonely writing job
every step of the way.  Cheering when you surprise her with a twist in a
new chapter…moaning, when you both start the heavy work of editing.

Writing a novel is a lonely pursuit.  You spend months by yourself
before anyone sees the work you have been slaving over.  Having a
co-writer takes the loneliness out of being a writer.

Yes, you give up a little autonomy over your plot and characters.  But
you also share the delight of incorporating new ideas and plot twists that you
would never have come up with on your own.

Take it from me: planning murder with a partner is much more fun than doing
it yourself.  Even our (very much still alive) husbands agree. 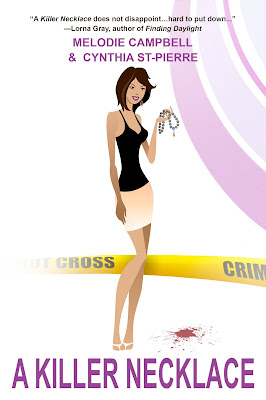 Who is the dead woman at the bottom of the stairs? A killer is determined to
keep her identity secret, even if it means killing again...

"If Christie wore Armani and Louboutins..." (review of A Purse to
Die For)

A KILLER NECKLACE (Imajin Books) is sold in all the usual places.

Posted by Eileen Schuh: at 8:00 AM 4 comments Links to this post

Getting away with murder

The chilling headline almost passed unnoticed, coming as it did late Friday before the long Canadian Thanksgiving weekend.

Oh, my goodness, I gasped. They're going to get away with murder!


That was my fear when I was writing FATAL ERROR, the second novel in my BackTracker series, centred around the murder trial of members of The Traz biker gang. There was a technical issue, a slight slip of protocol, a withholding of some minor evidence. Enough, though, that the bikers launch an appeal of their convictions and the Supreme Court of Canada agrees to hear their complaints.

Could it be that after undercover agents Shrug and Chad risked their lives and their souls infiltrating the gang in order to bring it down that their efforts are going to be for naught?

Could it possibly be that even though young Katrina finally breaks down and agrees to testify against these violent, powerful men, they are going to be set free? Could it be that no one would ever pay for young Lukas' senseless, violent death?


Could it be that the millions of dollars in taxpayers money spent on the Operation, the investigation, the trials would be spent in vain?

Would it be, after all that, the Traz bikers will walk free, take back the streets, sell their drugs, recruit vulnerable children, kill again...and again?


That scenario was scary enough in a novel, but for me to face it in real life...


Yes, I know the power of gangs so when late last Friday, the start of a long weekend, a judge quietly dismissed the murder charges against a group of Hells Angels, I shuddered.


I had looked forward to following what was being billed a 'mega trial'. A dozen or more Hells were being brought up on all kinds of charges, included many murder charges. This after many more charges had been dismissed because a judge ruled justice was taking too long. A special court house was designed...for everyone's safety.  Then some of those charged pleaded guilty, some died, some walked free and the 'mega trial' turned out to be for five Hells Angels only.


I was to be further disappointed when I discovered there was very little media coverage of the trial. None in English. I had to search with several engines and translate from French to find out what was going on in that special Montreal courtroom. That one of the crown's star witnesses was an ex-Hells Angel surprised me. Bikers don't turn on each other, at least in my BackTracker series they didn't.


Then came the grand slam of disappointments...the trial is dismissed because that ex-biker's testimony contradicted evidence the police had gathered but had not been shared with the defence...for reasons we do not know.


The power of gangs.


In my BackTracker series, members of biker gangs use threats, bribes, drugs, money, blackmail, flattery, romance and bullets to silence the media, to bypass justice, to get their way. They use high-powered lawyers, well-placed allies, and political friends. They use computer hackers to corrupt evidence and lies and conniving to avoid paying for their crimes.


So...what did they use in real life? I have a feeling I will never know.


Here's the link to that chilling Friday headline:

Getting away with murder is brought to you by:

"Courage and insight make for a compelling read"

“The very best in today's motorcycle gang stories just got a little better.”

Posted by Eileen Schuh: at 10:45 AM 0 comments Links to this post 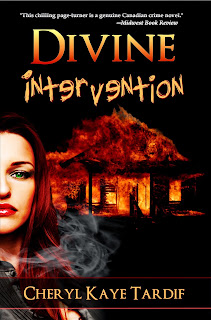 CFBI agent Jasmine McLellan leads a psychically gifted team in the hunt for a serial arsonist--a murderer who has already taken the lives of three people.
Jasi and her team members--Psychometric Empath and profiler Ben Roberst and Victim Empath Natassia Prushenko--are joined by Brandon Walsh, the handsome but skeptical Chief of Arson Investigations. In a manhunt that takes them from Vancouver to Kelowna, Penticton and Victoria, they are led down a twisting path of sinister secrets.
Free October 10-12 on Amazon - http://getBook.at/DivineIntervention

And pick up DIVINE JUSTICE, book 2 in the trilogy for $0.99 during the same dates via Amazon.com and Amazon.co.uk.
Posted by Cheryl Tardif at 1:00 PM 0 comments Links to this post

Oct 10-16 SALE: Get over 50% OFF the DEADLY DOZEN Book Bundle via Amazon.com and Amazon.co.uk 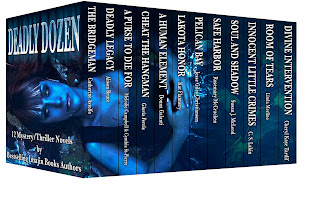 
Oct 10-16 SALE: Get over 50% OFF the DEADLY DOZEN Book Bundle via Amazon.com and Amazon.co.uk
Posted by Cheryl Tardif at 10:00 AM 0 comments Links to this post