What Makes an FBI Agent? 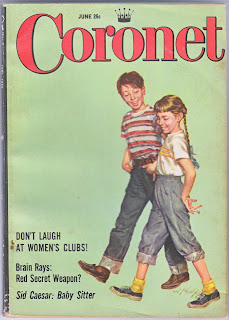 Travelling through southwest Utah a few months ago we came upon a glorious junk store. Tucked into a bottom corner of a toppling shelf were a stack of 'Cornonet' magazines. Now I had never heard of these before but they are a researcher's treasure. I tried not to be greedy and only bought seven about the twenty or so magazines that were there. Have been kicking myself ever since. They actually is a place for greed or whatever it's called when it's not neurotic.

In any case, inside the June 1955 issue I discovered an article titled 'What Makes an FBI Agent' by J. Edgar Hoover. It's listed in the contents between two other tantalizing entries: 'Don't Laugh at Women's Clubs!' and 'Brain Rays: Russia's Secrect Weapon'.

Here's an excerpt from Hoover's piece. Although not very exciting by today's standards, I'm guessing it was racy for the time. Or maybe it was all the 'reading public' was allowed to know.

"No agent can know when the most routine action may suddenly command all his reserves of strength and courage.

Witness what began as an ordinary procedure - two agents spotting and following a fugitive's vehicle on a six-lane West Coast highway. When the fugitive halted at an obstruction, one agent stepped from the car, identified himself and told the man he was under arrest. The fugitive put his car in gear and shot away. Simultaneoulsy, the agent lunged half-way through the window in an attempt to seize the ignition keys.

The car was now traveling at high speed and the cursing fugitive, ignoring orders to halt, swerved it in an effort to rake the agent against roadside poles. The curb saved the agent from being crushed and as the fugitive savagely kicked him in the face the car hurtled the curb and crashed into an office."

Posted by Juanita Rose Violini at 9:28 AM