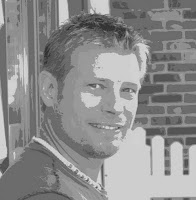 Today, Criminal Minds at Work welcomes another slightly twisted mind into our crime lab (aka blog) -- Jeff Bennington, author of REUNION. I've seen Jeff around on various blogs and social networks, and was recently asked if I'd like to be featured on his blog -- The Writing Bomb. Of course I said yes (yeah, my middle name is "shameless" after all), so you'll soon see me featured there.

When I checked out Jeff's site, I realized this was the same author who had asked for book cover input a while ago, and I believe I had a couple of suggestions for his new novel cover, which I have to admit is very striking and well done.

Here's the description for REUNION:

David Ray killed eight students and then turned the gun on himself. He thought the shooting and suicide would fix his world. It didn't. The massacre threw Tanner Khan and the other survivors into chaos.

Twenty years later, Tanner and his fellow classmates reluctantly agree to hold a reunion to lay the past to rest. Although they suffer from Post Traumatic Stress Disorder, they come back to their hometown and reunite in the defunct school building. Old flames are rekindled, fears are ignited, and their lives are about to explode in a whirlwind of memories, haunted by the spirit of David Ray.

Once they're inside the school, they discover that a dark entity has joined them. It has come to collect a debt, long overdue, and someone has to pay. Will Tanner and his classmates overcome their fears, putting the pieces of their lives back together, or will they be consumed by their worst nightmare?

You can check out REUNION on Amazon and other retailers.