While working on my latest thriller, Children of the Fog, I had to delve into an area of crime that no parent ever wants to go into--the abduction of children. Author Amanda Hocking also blogged about missing children today.

Choking back tears, I waded through Sadie's awful journey, her grief and guilt. I believe Children of the Fog is my best work to date, but I'll let readers judge that when it releases next month in ebook edition, with a paperback edition to follow afterward.

Here are some stats on kidnappings in Canada:

According to The Eighth United Nations Survey on Crime Trends and the Operations of Criminal Justice Systems (2002) (United Nations Office on Drugs and Crime, Centre for International Crime Prevention), Canada had the third highest incidence of abductions out of over 35 countries polled for the survey.

In 2009, Statistics Canada reports 429 cases of abduction in Canada.

With the implementation of Amber Alerts and a more educated public, the rates of abduction have been steadily decreasing in Canada, and I hope it continues to do so. No parent wants to imagine this scenario, and no parent should ever have to. 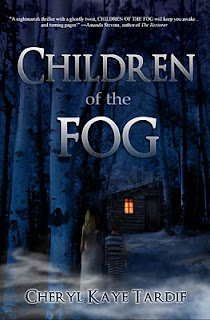 YOU HAVE 10 SECONDS TO MAKE A DECISION:
Let A Kidnapper Take Your Child, Or Watch Your Son Die.
Choose!

Sadie O'Connell is a bestselling author and a proud mother. But her life is about to spiral out of control. After her six-year-old son Sam is kidnapped by a serial abductor, she nearly goes insane. But it isn't just the fear and grief that is ripping her apart. It's the guilt. Sadie is the only person who knows what the kidnapper looks like. And she can't tell a soul. For if she does, her son will be sent back to her in "little bloody pieces".

When Sadie's unfaithful husband stumbles across her drawing of the kidnapper, he sets into play a series of horrific events that sends her hurtling over the edge. Sadie's descent into alcoholism leads to strange apparitions and a face-to-face encounter with the monster who abducted her son--a man known only as...The Fog.

Available in ebook edition this March! Watch for it...and keep your windows and doors locked.

In Children of the Fog, I really wanted to dig deep into a flawed character who has to make a very tough decision, one that some readers won't agree with. Does she let the kidnapper take her son, or does she put up a fight and watch him kill her son before her eyes?

What do you think YOU would do in her situation?

Cheryl Kaye Tardif
http://www.cherylktardif.com
Posted by Cheryl Tardif at 10:09 AM

You're right, Cheryl. I'm not even going to THINK about that question or about my answer.

I'm glad you like the cover; it's one of my favorites.

I would never want to have to answer that question. How can a mother not fight? And how can you watch your child get killed? It's a horrible choice.