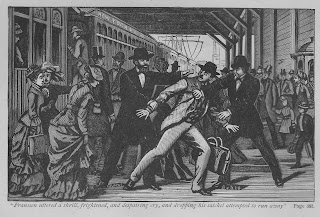 "Franssen and the detective having quenched their thirst and their sorrow at parting in the foaming glass, then started for the ferry, where, purchasing a ticket for Buffalo, they went on board the boat, which conveyed them across the river.


Mendelsohn began to grow uneasy; it lacked only fifteen minutes of train time, and as yet he had seen no indication of the parties whom he expected. He was debating in his own mind the course that had better be pursued, when, as they were walking through the long, covered way that led to the cars, Mr. Bangs suddenly stepped out from one of the doorways that opened into the street, and stopping immediately in front of them, addressed the shoemaker:


"Your name is August Franssen, I believe?"


Franssen, thus suddenly accosted, was unable to do anything but stammer out an affirmative.


"Then," said Mr. Bangs, sternly, "I arrest you for the murder of Adolph Bohner!"


Franssen muttered a shrill, frightened and despairing cry, and dropping his sachel, attempted to run away, but the iron grasp was upon his shoulder, and escape was impossible. finding that further efforts were useless, with a smothered groan he submitted quietly and without further effort to the officer, who slipped upon his wrists the badge of dishonor - the shackles of the criminal.


The journey that followed was very different from the one that he had planned for himself, and its destination quite foreign to the locality named upon his ticket.
Posted by Juanita Rose Violini at 2:19 PM