Isn't poverty and homelessness (as well as murder) a crime?

Yesterday, I received an email from Stephen Berg, the Development Director at Hope Mission here in Edmonton, asking if I would agree to pre-record a radio interview for the Mission of Hope Radio-thon in October and talk about Hope Mission. I was extremely honored that Steve thought of me; he has always been very supportive of me as a survivor of a violent crime and also as an author. I knew immediately what I wanted my message to be. I wanted to share how I am connected to Hope Mission by tragedy, what it offers and how important it is to Edmonton inner city survival. 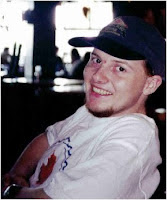 First, let me remind you of what happened to me and my family in January 2006...

My youngest brother Jason was raised in a good and decent family, went out on his own in his early 20's and tried to start his adult life. But he struggled financially and emotionally. He went from job to job, as is common with many young people, and he moved to Edmonton on my invitation, with hope to start a new life for himself. But somewhere along life's path, he lost his way.

Jason turned to alcohol and it became his companion. He lived for some time on the streets, then in a men's shelter. He called occasionally and told us about Hope Mission, that they were helping him. He also suffered from mental illness and bouts of depression. He was on medication--when he remembered to get it. Slowly, he closed himself off from family, and I even filed a missing persons report at one time because we hadn't heard from him in months.

We finally did hear from him, indirectly. I was contacted by a local hospital. Jason had been admitted because he'd been badly beaten. But by the time they contacted me, he had already been discharged. At least we knew he was still alive. We heard from him a few times after that.

Jason had just celebrated his 28th birthday on January 15th, 2006. Then on January 23, 2006, two police officers showed up on my doorstep and my world and that of my family's was turned upside down. What we had feared most had happened. My brother, a funny copper-haired computer whiz, was found dead in the alley close to the Mustard Seed church in downtown east Edmonton. His murderer is still at large and police are still looking for leads in this case.

After his death, we were contacted by people who knew Jason. We even met some of his friends--his city family. The police officers were kind to us and very respectful of Jason's memory. They admitted that they knew of him, but that Jason had never caused any serious trouble and had been the recipient of violence (as in the time above when he was admitted to the hospital). It is during this time that I was connected again to Hope Mission. Many people there knew about Jason and knew him.

In January 2007, Hope Mission held a special memorial to honor all the people who had died in the last year--people who had lived like Jason, disenfranchised, suffering from addictions and feeling hopeless. Most of these people struggled through life and died very violently. My husband, daughter and I attended this memorial, and I was asked to talk about Jason and remember him. That is the only time I ever recall speaking to a group of people while my entire body shook and while struggling to hold back tears. It was a beautiful memorial, and I was so grateful to meet others who knew my brother. Everyone had such wonderful things to say about him. He was loved.

Shortly afterward, my husband and I decided to support Hope Mission financially. We've always given money to charities before but this time we had a personal connection. We signed up for one of their donation programs--Friend of the Friendless. We gladly give money every month and I can't tell you how rewarding it feels to know that our money is going to something so vital, so hopeful, and to an organization that can use it to help save a life.

When my novel Whale Song was published by Kunati in April 2007, I dedicated it to Jason. I also decided to give a percentage of my WHale Song royalties to the three nonprofit organizations who helped my brother--the Bissell Centre, Mustard Seed church and Hope Mission. These types of nonprofits are found in every major city, and it's unfortunate but we need them. And they need us. Without financial support, programs are shut down, shelters are closed or never expanded and people are left with nothing--no food, no shelter, no support, no hope.

Next time you see a homeless person, someone begging in the street, a person you would consider a "bum", please remember this: this person before you is someone's son or daughter, maybe someone's brother or sister, or a mother, father, uncle, aunt, grandmother, grandfather. These are PEOPLE. With feelings, emotions, hopes and dreams that have been squashed by addictions they can't help, jobs they're just unable to get or keep, and a life they never chose.

Do you really think anyone would CHOOSE to live like this if they really felt deep inside that there was another way? Don't you realize that they often think they're unworthy, that they don't deserve better? Don't you understand that it's this lifestyle that leads some of them to crime; they weren't born criminals--at least not the majority. I think the poverty lifestyle is also an addiction. It's a life they know.

I implore you to look at the people behind the grizzled, dirty, tired, drunken, drugged up, battered, homeless faces. SEE them as human beings. And I urge you to check out your local homeless shelters, support them in their work and in bringing hope to those less fortunate.

Don't you think everyone deserves hope? I do.

Please visit Hope Mission's website and support the work they are doing. Right now they need donations to help send children to a special camp. I am about to donate to this myself. And remember...your donations could save a life.

More on the Radio-thon and my interview in my next post.

Buy Whale Song in support of Hope Mission, the Bissell Centre and the Mustard Seed church and help the homeless.

Posted by Cheryl Tardif at 9:10 PM