If one whiff of smoke from an arsonist’s fire made you see into a killer’s mind, would you consider it a gift or a curse?

Whether you believe in psychic or paranormal phenomena or not, there is an element of the "unknown", happenings that don't lend to logical explanations. Since the beginning of mankind, there have been reports of strange or unusual phenomena--UFOs, psychic visions, crop circles, Stonehenge and much more.

Can God or an ultimate power still be found within a psychic gift?
Or is this power coming from something or somewhere evil?

Have you ever had a premonitory dream or vision? Ever touch
something and suddenly know who held it last and why?

For some, paranormal gifts are a reality; for others a curse and for many an impossible feat. Some of us avoid thinking about it, while others are drawn to television shows like Medium and Ghost Whisperer or to novels like Divine Intervention that explore the luring world of the paranormal. 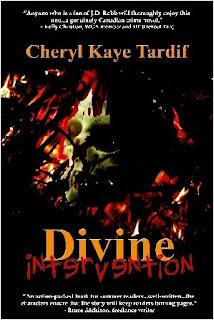 For CFBI Agent Jasmine McLellan, her special gift as a Pyro-Psychic gives her an ‘edge’ as she leads a covert team of psychic government agents in search of some of North America ’s most ruthless criminals.
Jasi and her team hunt for a deadly serial arsonist who is bent on revenge and murder in Divine Intervention, a novel that explores abortion, abuse and abandonment.
Vicious murders, deadly secrets, suspects with hidden agendas and a dead girl’s ghost in Jasi’s closet are the key elements to Divine Intervention, book 1 in a paranormal suspense series set slightly in the future, and a novel for fans of J. D. Robb and Kay Hooper or TV’s CSI , Ghost Whisperer and Medium.
"An exciting book from start to finish...mystery fans will love this book." --Writer's Digest
Read an excerpt.
Order Divine Intervention on Amazon.com or Chapters.ca.
P.S. I welcome your thoughts on the questions above.
~Cheryl Kaye Tardif,
author of Divine Intervention
Posted by Cheryl Tardif at 9:47 AM