And on and on it goes...#BikerGangs

When I wrote the first novel in my BackTracker series, I had no intention of following it up with eight more novels. But if I had intended to write a lengthy series, I couldn't have chosen a more apt subject--drug-dealing biker gangs.

They just won't go away, either in real life or in the BackTracker series. They are rich, powerful, and often beyond the reach of the law. (See my post, Getting away with murder )

They run the illicit drug trade around the world, as well as control the lucrative businesses of human trafficking, prostitution and illegal arms dealing.

My fictional biker gang, The Traz, was brought down in a massive undercover police operation in Books I and 2 of the series (THE TRAZ and FATAL ERROR). However, they are still around in my upcoming Book 4, OPERATION MAXTRACKER.

"You can destabilize them, but you'll never get rid of them," says André Cédillot, organized crime specialist in the article, How the Hells Angels Made a Massive Comeback in Quebec.

He also mentions the Hells Angels expansion into other fraudulent activities.

In OPERATION MAXTRACKER, The Traz is about to seize control of cyberspace. Now, wouldn't that be lucrative...

And on and on it goes...#BikerGangs has been brought to you by: 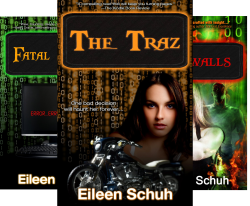