It's well known that victims of domestic violence have strong bonds with their abusers. In fact, it takes a woman, on average, twenty attempts to break free of a violent relationship.

If that relationship is a well-established one, reasons for staying in it might be a bit more understandable to us than if the violence is occurring in a dating relationship. We realize that in a violent marriage, there might be financial reasons trapping the woman, issues surrounding the custody of children or shared property, and/or religious obligations.

But what processes are at work when a woman stays in a dating relationship with an abuser?

By taking a minute to think about this, one realizes that in every abusive relationship, the violence starts somewhere, and often it starts during courtship. Why a woman would stay in an abusive courtship is something not even the woman herself likely understands. One's attraction to an abuser is a mystery. It's not easy, perhaps it's even embarrassing, for one to accept that one's been duped into believing the abuser's apologies and promises that the abuse will stop. It's hard to verbalize one's reasons for believing the abuse was an accident, was deserved, was not what it seemed, will stop. It's beyond comprehension that one's purest and deepest love and trust for one's partner isn't enough to quell the violence.

In fact, it is so difficult that many women will deny they are engaged in or actively pursuing abusive romantic relationships. The three women in the highly-publicized Jian Ghomeshi trial  went so far as to lie in their sworn statements to police about their continued attraction to, and romantic pursuit of, Ghomeshi following the alleged abuse. Not until the defense offered evidence that suggested otherwise, did that truth come out.

What trick of abused women's minds and emotions makes courtship violence seem irrelevant or subordinate to the romance accompanying it?

Because we know so little about the dynamics of domestic violence, our efforts to grapple with the situation are largely inefective. The justice system valiantly struggles to do right by victims of domestic violence, law enforcement agencies revise and re-revisit protocols for investigating such complaints, and social agencies try to pinpoint the causes. Yet, reporting of domestic violence crimes remains extremely low as are conviction rates, victims still feel further victimized by the investigative and the court processes, and abusers keep feeling justified.

It is my hope that my new release, SHADOW RIDERS, will increase our knowledge and understanding of the mental and emotional processes which trap women in violent relations.

With proper understanding, victims will be empowered and communities will be able to effectively support these women until they are strong enough to break free. 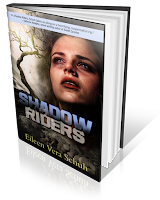 From the moment she falls in love with the ‘bad boy’, the very core of her being is forever changed

Allison Montgomery is wrapping up a career as a successful entrepreneur when she’s brutally kidnapped and whisked to South Korea. To ensure her survival, she gradually forges a bond with Carbon, her smooth-talking but abusive captor, a bond that over time proves incredibly strong.

A criminal record, death threats, counseling—nothing can convince Allie to betray her illicit lover. However, a team of dedicated cops, an understanding lawyer, her ex-husband— there are those who persist in believing she can break free of Carbon’s hold.

She must. Justice for six massacred men depends on it.

“In Shadow Riders, Schuh takes us along on a horrifying, suspenseful trip.” ~Catherine Astolfo, award-winning author of Sweet Karoline