PTSD - leaving the pain behind


There have been many headlines lately about soldiers and police officers not receiving the treatment they need for Post Traumatic Stress Disorder (PTSD), the emotional tension and pain that results from participating in unexpected (and usually violent) events--situations that our minds and emotions can’t make sense of.

Participation can mean we had a direct hand in the trauma as the perpetrator or the victim. Or we can participate by witnessing something unfathomable and traumatic, hearing about, or seeing it in the media. It may be something we have no words for, violent unnamed images racing around in our mind, causing reoccurring nightmares and daytime thought disturbances. We may carry guilt, justified or not, believing we caused the event or that we should not have been the one to survive. We may harbour ambivalence, as children of abusive parents often do—confused that those we love cause pain. We may regret our actions, or our in-action. We may disapprove of our emotional responses to the incident.

Left untreated, PTSD often festers, balloons, becomes hellish and overpowering. There are effective treatments for PTSD (also known as post traumatic stress (PTS), post traumatic Stress Syndrome (PTSS), and critical incident stress). In Book 3 of the BackTracker Series, my FIREWALLS characters, of course, get the best professional help available (thanks in part to my psychiatric nursing background). But as with all medical treatments, the patient must first give consent and that initial step toward recovery is a giant one for many with PTSD. Reluctance to accept treatment is part of the illness and should not be judged harshly. 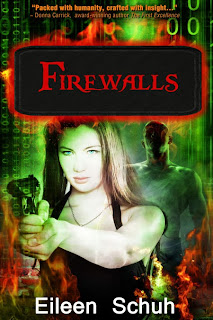 It takes almost an entire novel before my young heroine is ready to leave the pain behind. This reluctance is not unusual. I notice when those in the headlines speak of the illness they are suffering, they often speak of it possessively—it is theirs.  They talk of people misunderstand their PTSD, they don’t get the treatment they need for their PTSD, their PTSD was misdiagnosed, is getting worse, is best handled with medicinal marijuana.

There are many reasons people cling to the pain of the past. The longer PTSD is left untreated, the more difficult it is for victims to recover. The most effective treatments begin immediately, but sometimes that is not possible especially in situations like out on the battlefield, or with children growing up with abuse. The pain becomes ingrained, the responses to it habitual.

In FIREWALLS, Katrina feels guilt about the prospect of leaving the past behind: “Laughing made her feel guilty because while she laughed, Lukas rotted six feet underground....” She feels any type of forgiveness or moving on, any acceptance of what happened shows disregard for the victims of the trauma she witnessed, dismisses them. Lends support and approval to the perpetrators. She’s bent on revenge, on seeking justice. She is angry and hurting and that’s the way she wants to be.

Of course FIREWALLS is not simply a story about PTSD. Those who read my novels, know I weave many threads through my plots. Just as in real life, daily routines continue for those with PTSD, relationships evolve, careers progress. These are police officers who are suffering from past traumas and they continue on, using their smarts to solve complicated crimes, establish complicated office relationships, seek love on the side.

But as in real life, everything they do is tainted by the PTSD they are fighting. Their behaviours, their personalities, their goals. Their ability to love and be loved.

My characters are lucky that they have a strong network of peers and co-workers pulling for them. A whole crew willing to overlook their weaknesses, make allowances for their irrational behaviours, encourage them, eventually force them into formal treatment. These understanding and loving people give the PTSD sufferers a reason to look to the future, they will be there for them on the sunny side of the ordeal.

It is only when Katrina realizes she is on the brink of losing her career, her sanity, her freedom-- the love of her life-- that she finally agrees to take steps to end the pain.

In the sequels to FIREWALLS, Katrina goes on to become a very successful and powerful woman. All people with PTSD should realize they, too, can have a bright future. The world needs their talents. Their love. Their ideas, caring, creativity.  If only they can agree to release the pain that’s binding them to the past.  If only their loved ones will stand by them, encourage them, accept them, understand them until they’re ready to do take that step toward freedom.

FIREWALLS: Dedicated to those struggling with past traumas and to their loved ones who share their pain.

This is outstanding, Eileen. As someone else who addresses mental illness/health in her novels, I think both your post here and your novel(s) are incredibly important. Great links, too. Well done!

Thank you so much for your encouraging comments, Tanya. It's my hope that my novels not only entertain but make a difference.