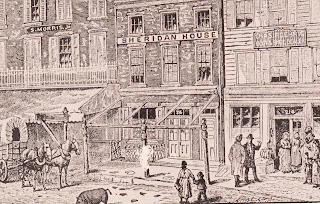 Was the purpose of this secret society of Irish immigrants, The Molly Maguires, to fight oppressive mine owners in the mid 1800s in Pennsylvania - or were they a Death Squad? Killings by the Molly Maguires were as common as slagheaps in coal country. Twelve unsolved murders took place at the headquarters for the Coal and Iron Company in the first 8 months of 1867. Pinkerton's Detective Agency was called in. Irish newcomer James McParlan, standing 5'7" was assigned to the case. He got paid $12 a week.

Disguised as a clean-cut Irish dandy, McParlan rolled into Pottsville. A large bankroll in his pocket he headed to the Sheridan, a bar where the Mollies were frequently found. After buying drinks for everyone in the house he then took everyone's last penny playing poker with them - then he announced "I kill an English bastard in Buffalo. And I play with counterfeit money. But you boyos needn't worry - my counterfeit is perfect." The bills, later carefully examined by a bank tell with a magnifying glass, were pronounced perfect. McParlan later commented "Of course it was perfect. It was good US money."

After two years undercover as Jimmie McKenna, secretary for the secret society, the detective was distressed to find himself named as the leader of a three man execution squad. He hoped for circumstances that would prevent his carrying out of the orders - and he got his wish. The 'fingerman' James 'Powderkeg' Kerrigan got impatient waiting for their arrival and took care of the execution himself. Powderkeg later turned stool pigeon and was the only one of the Mollies to walk away from a death sentence. James McParlan went down in history.

Posted by Juanita Rose Violini at 9:42 AM