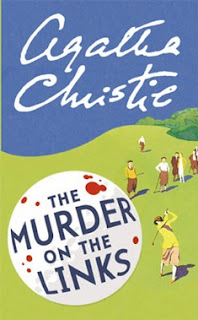 Traditionally book publishers allow authors very little say about how their book cover will look; especially newer, unproven authors. Agatha Christie's third book was Murder on the Links published in 1923. Here's what she had to say about her book jacket.

“Apart from being in ugly colours, it was badly drawn, and represented, as far as I could make out, a man in pyjamas on a golf links, dying of an epileptic fit. Since the man who had been murdered had been fully dressed and stabbed with a dagger, I objected.” (agathachristie.com)

Not sure if the cover shown here is the original but if so it looks like she won the battle. Luckily I have recently discovered a publisher that is allowing writers to have a say in how their book look. A very refreshing and clever approach. They do a smashing job. Imajin Press.
Posted by Juanita Rose Violini at 8:12 AM

My publisher, WolfSinger Publications, also consulted extensively with me on the cover. It ended up not being at all as I had envisioned, but the artwork is amazing and really appeals to the sci-fi market. I was quite willing to accept the artist's and publisher's suggestions as they are the marketing experts.

Thank you, Juanita, for mentioning Imajin Books. We do let our authors have a lot of say in the cover design, trailer design and editing process. We'll make final decisions, of course, but it's very important to us that our authors love their covers etc, so we work with them until they're happy. We want them to feel proud of their book and trailer. As an author myself, I know what it's like to have to promote a cover you really don't like. It's not easy.

Writers should be willing to let their publishers and cover designers make the final decisions, but if they really don't like something they should speak out and work with their publisher to find that compromise. This being said, authors that are easy to work with are a HUGE plus in this biz and ones we'll want to keep around. :-)

Eileen, your cover design is unique and especially appealing to the sci-fi market. We hired the same designer to do some of our YA covers. :-)

When I started out, I had no idea how important covers are. I still have no eye for creating one (thank goodness I don't have to) but I've gotten better at recognizing a good one when I see it. Sadly, publishers often don't spend a lot of money on covers, and while I'd like to trust their judgment, I have seen a bad cover hurt sales for a good book.

I'll have to keep an eye out for those YA covers, Cheryl. Mitchell Bentley is the cover artist for SCHRÖDINGER'S CAT. One can see more samples of his work on his website.