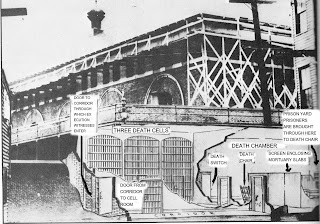 The guilt or innocence of Nicola Sacco and Bartolomeo Vanzetti, two Italian immigrant anarchists, was hotly debated right up until the switch was thrown on the men strapped into the electric chair at Charleston Prison. Convicted of two murders during a 1920 armed robbery Sacco, a cobbler and Vanzetti, a fish-peddler, believed they were being sentenced more for their politcal beliefs than for any crime. Protests over their treatment was worldwide with notables such as Albert Einstein and George Bernard Shaw registering their doubts over the guilty verdict.

Angry dissenters gathered outside the prison on the Italians' last night. Author Katherine Anne Porter wrote: "At midnight the light winked off, winked on and off again, and my blood chills remembering it even now - I do not remember how often, but we were told that the extinction of this light corresponded to the number of charges sent through the bodies."

Dispute over the fairness of the trial and the impartiality of the judge is still discussed among historians.
Posted by Juanita Rose Violini at 3:20 PM