The recent case of Thai workers brought to the US to work on Pineapple farms, who then had their passports confiscated, was a sharp reminder that human trafficking is alive and well and closer than we can imagine.
The fact that this act was allegedly perpetrated by a supposedly respectable recruiting agency based in Los Angeles is shocking, perhaps. But the fact remains that placing a price on a human life is a practice that is still going on throughout the world despite the abolition of slavery for more than a hundred years.
A recent docu-drama 'I am Slave' set in London also brought to light the uncomfortable fact that in apparently enlightened and multi-cultural cities such as London, trafficking into prostitution and modern day slavery is far more common than we would like to believe.
So, what is it then that allows this trade to survive and even as some might say 'thrive'? Certainly in the case of workers and those trafficked for prostitution there is a criminal element whose duplicitous recruitment techniques lull the victims into a sense of false security. By the time they know the truth it is already too late and fear prevents many from seeking the emancipation they are entitled to.
Far from our shores another, though equally repugnant, form of trafficking is also still going on. Children, often pre-teens, are being sold into a life of misery in the sex trade across Asia, South America and Africa. Shockingly it would seem that the first step on this road to suffering sometimes begins with the parents. Deplorable, yes. Unforgivable, maybe. Understandable?
In order to cast a judgement on these actions it seems prudent to consider the parents' choices. These are not housewives sitting in New York, Paris, London or Berlin. Take for example a young family in the border regions of Myanmar (Burma). The region has experienced the longest running civil war in history. What are her choices for her children? The army and militia groups recruit children from about ten years old. Young girls may be subject to rape by the roaming militia. She is hard put to feed a small family and may be looking at a future of starvation for one or all of her children.
Could she be forgiven for sending one of her children off to neighbouring Thailand? In the process she would be saving the child in question from all of the above, gaining money to save the remaining children and further receiving income from the child's 'occupation' in Thailand. None of these are good choices, but they are decisions that have to be made across the world from Cambodia to the Sudan, South America to the Philippines. Should we think these mothers love their children any less? 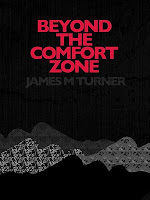 In order to eradicate or even slow down the trade of vulnerable elements such as those mentioned above we must look to the causes; war, poverty, crime and corruption and commit to a concerted effort to resolve these core triggers. Until we do, it is likely that the latest incident being reported recently in the United Stated will not be the last.
James M Turner is the author of Beyond the Comfort Zone, which documents his own hair-raising adventure battling child traffickers in Asia.

Posted by Cheryl Tardif at 3:10 AM

Thanks for allowing me to voice concerns on this troubling subject.

That is so horrific, especially the trafficking of children it's hard to read about it. Kudos, James M. Turner for raising awareness about this sickness.

What an eye-opener. Thanks so much for posting this.

This is such an enlightening post, James. Thank you for sharing.

Best of luck with your new book.