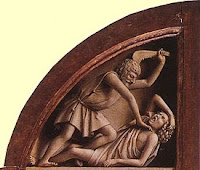 Recently (or maybe not-so-recently, I forget) I sent a query letter, along with a synopsis, to an agent. I'm still in the market for a good agent, so I'm always sending these things out and so far I've accumulated quite a collection of rejection letters. Most of these rejection letters, through necessity or otherwise, are form letters with maybe a quickly scribbled word of apology added in the margin. One of these snagged my attention however when the scribbled words turned out to be, "I just don't believe the antagonist's motive for murder." I stared at her words in surprise and was almost immediately filled with sadness for this pitiful creature, for it was obvious that she must lead an extremely sheltered life and have no access to books, television, newspapers, the internet, nosy neighbors, or even the sidewalk in front of her home. Motive for murder?!? Those of us who delve repeatedly into the twisted psyches of killers learned long ago that murder needs little or no motive (although in order to write a convincing and juicy mystery and/or crime novel a motive is usually a must!) to take place. Sure there are murders that stem from elaborate scemes, a botched robbery, or passion... but there are murders that happen all the time that defy the "norm". Who hasn't flinched at the news of someone who's murdered over an imagined insult, a slight (real or imagined) on a crowded city street? Whole families have been killed for no more reason than to steal the dog! How many homeless persons suffered beatings and death at the hands of someone that considered the act little more than a prank? Motive? Motive? The madness and evil that men (and yes, women) do needs little to motivate it. An idea that may seem monstrous or unimaginable to the average person may seem totally rational to a killer. This has been proven over and over again since the days when Cain killed his own brother Abel in a fit of jealousy. So I'm afraid that I have to disagree with this young lady when it comes to a motive for murder... people don't need none.
Posted by Arnold Wolf at 3:59 PM

Truer words have never been more piss-offedly written. ^_^ I totally agree with you here. It's nice to recieve something other than the mind-numbing form letter rejection. But, it's kinda funny and irritating when the rejection is due to closed-mindedness.