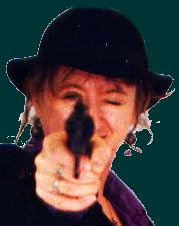 Really, what other title can go with a photo like this? Is it edgy?

I've been trying to define what 'edgy' means, as that seems to be a desired quality in writing these days. Where does edgy stop and bad taste begin?

Enough philosophy, let's talk about me (edgy or just egoic?).

The twisted path to mystery writing began, for me, in the late 1980s, deep in the hollows of the Banff Springs Hotel - a section tourists never saw and where managers huddled in the windowless labrinth of back passages. The marketing manager of the time surrepticiously (does this blog have a spell check?) slid me a piece of paper with a penciled phone number. "Call this guy. He might be able to use you." 'This guy, we'll call him Bob, (everybody is called Bob except for 'Mike from Canmore') had a fledging business providing corporate entertainment at the CPR hotels back then - including 'murder mystery dinners'.

It was February. Bob wanted me to find a stage crew that would work, for free, carrying two hundred trees up a two story fire escape, into the hotel, at midnight. When I looked askence (probably no spell check here), he showed me how it was done. Emerging from his office, a back booth at a restaurant that looked like a railcar from the outside, Bob stopped two young men wearing mukluks, who spoke no English except for 'Oui' - wait! that's not English. Bob put the proposal to them and they agreed - 'Oui'. It's a long story and ended in court a week later as our free stage crew left the Springs with a silver cake platter, complete with cake, and a very expensive carpet from the hotel to keep them warm in the back of the old 'fish & chip' truck they were living in.

The most adventurous evenings Bob provided were Murder Mysteries, though he hated doing them. A fan of the genre from very young, I got excited at the prospect of producing them myself and did so for the next sixteen years.

For me, above all, in mysteries, the clue trail is the thing! I love the puzzle. Agatha Christie is the master as far as I am concerned and I would love to fill her boots. My writings all take place before the computer and high tech forensics came on the scene. Not exactly 'edgy' but I'm working on it.
Posted by Juanita Rose Violini at 12:52 PM

And, OUI! There may be a spellcheck...but there's no French-check. lol

Keep posting! I wanna know more about your murder mysteries.