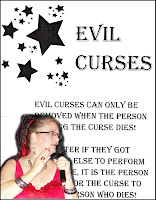 The actor who is giving out the 'verbal only' clue 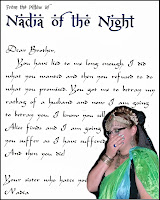 must also make sure it is relayed to every group of people as he 'works the tables'. Mingling should take place between the scripted scenes as well as at the beginning of the evening.
Included in this posting are the motives for three of the four suspects; Nadia, Shyster, and Samira. The fourth piece of evidence, although addressed to Samira is a clue to something that Shazam is trying to hide. His motive is covered in the dialogue with the other characters during the scripted scenes.
Posted by Juanita Rose Violini at 9:26 AM