COLEMAN is serving a 3 year sentence for three armed robberies and break & enter. He was released into the community on Statutory Release on October 19 2012. Almost immediately after being released he disappeared and his parole supervisor has lost all contact with him. A wide warrant was issued for his arrest on October 25. If located do not approach, call police.
_________________________________________ 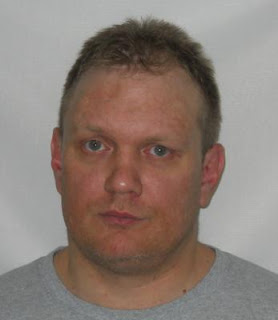 EVANS, Clifford Francis (1971 March 24)
6’0”; 235 lbs; tattoo’s: dragon with skulls right calf; skull right upper arm; R.M.R. right elbow
EVANS is serving a 2 year sentence for possession stolen property; operate motor vehicle while disqualified X 2; fail to appear and motor vehicle flight. He was released on Statutory Release on August 18 2012. EVANS parole supervisor has lost all contact with him and his whereabouts are unknown. On October 12 a wide warrant was issued for his arrest. EVANS has an extensive criminal record with over 50 previous criminal convictions. If located do not approach, call police.
____________________
Eileen Schuh, Author

The very best in Crime Fiction and Pyschological Thrillers