Blonde Demolition is out!

She glanced at Trey.
He raised a dark eyebrow. "You used to know when I was near."
"Been a long time since I've had to watch my back."
His long slender fingers spread across his chest. "That hurt."
"Truth does." 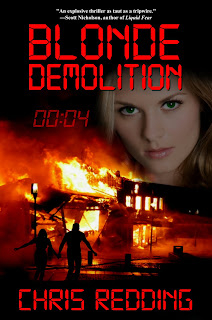 Cal looked her way from the beer tent, his brows knit. The carnies didn't often stop to talk to the firefighters. Cal moved his big frame in front of her as if she needed protection.
She noted that he looked tired. Maybe she shouldn't bring up her idea about finding her parents today. It could wait until the fair was over.
His pace was slow but steady as he moved toward her. He tugged Mark, the new guy, along with him.
The idea always amused her when they circled the wagons around her. It was sweet how they protected her.
They had no clue she could defend herself armed or unarmed. That information didn't go along with her trust fund reputation. No need to enlighten them.
Trey's words brought her back. "Have you thought about it?"
"Yes."
"And."
"I didn't come up with an answer." She wouldn't be rushed. She would decide this in her own damn time. Not on someone else's schedule.
"Better soon."
"You better move on, Trey."
He glanced back at the firefighters who walked his way. A sardonic grin creased his face. "Well, well."
"Leave, Trey. I don't want to see anyone hurt."
"Me or them?"
He walked past her as if she didn't exist.

Blurb:
YOU JUST CAN'T HIDE FROM THE PAST...

Mallory Sage lives in a small, idyllic town where nothing ever happens. Just the kind of life she has always wanted. No one, not even her fellow volunteer firefighters, knows about her past life as an agent for Homeland Security.

Former partner and lover, Trey McCrane, comes back into Mallory's life. He believes they made a great team once, and that they can do so again. Besides, they don't have much choice. Paul Stanley, a twisted killer and their old nemesis, is back.

Framed for a bombing and drawn together by necessity, Mallory and Trey go on the run and must learn to trust each other again―if they hope to survive. But Mallory has been hiding another secret, one that could destroy their relationship. And time is running out.

Other books by Chris Redding
Corpse Whisperer
The Drinking Game
Confession: Volume One
Incendiary
A View to a Kilt

Love the cover!
And the writing is pretty sweet too. : )

Ok - maybe 'sweet' is the wrong word. Both the cover and the writing are dynamic.