All artists are aware of the potential for their work to influence others--a power that is sometimes the most significant reward they receive.  This influence usually only makes the headlines when dastardly deeds are done in supposed response to song lyrics or movies or such. At those times, I always give sober second thought to what I'm publishing.

I'm especially aware of the power of the pen because my crime novels are addressed to teens and young adults, who may be particularly volunerable to the influence of the written word. I want to inspire my readers to lead better, safer, more meaningful lives--not criminal ones.

My BackTracker novels are action-packed, to be sure, and many teens are thrill seekers. To prevent the drug-dealing gang life from appealing to that quest for excitement, I focus the novels on the exhilarating and dangerous lives of the crime-fighters, rather than the criminals. My hope is that I may influence my young readers to become officers of the law rather than gangsters.

Whereas I do want to educate my readers about the dangers of gang life, I don't want to teach them how to perform illicit  acts. In The Traz, I mention Lukas is making Ecstasy but you won't find any recipes. Katrina hacks into computers, but my readers won't learn how she did that. Shrug seals a massive cocaine deal, but we're not privvy to the details.

But, then there is the amanita muscaria. My first versions of The Traz didn't include the name of the poisonous mushroom young Katrina fed the bikers to disable them as the police moved in on the heavily-armed compound. Several editors and beta readers questioned whether or not such a mushroom even existed. And if so, would it be found in the area where the story took place, at that time of the year.

After soul searching, I decided using the name of the mushroom definitely added credence to the story. I realized information about poisonous mushrooms is readily available to everyone with today's technology. So, yes, The Traz ends with Katrina treating the bikers to nibbles of her amanita muscaria, a toxic psychotropic mushroom, available throughout the world, that is known to be temporarily disabling but seldom fatal.

I've come to believe naming the mushroom was no more irresponsible than mentioning the brand of pistol used in the murder scene. A crime was committed and the weapon identified, vital components in any crime novel.

So far, I've heard of no  amanita muscaria poisonings as a result of The Traz, so hopefully my young readers are all  playing safe!

Poisonous mushrooms has been brought to you by THE TRAZ 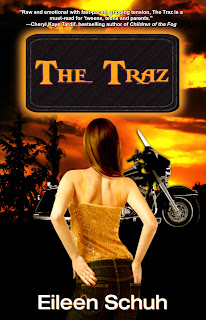 "A book full of action and adventure..."

“I loved this first book in the series...”
"Exciting, powerful, and tragic..."

“My weekend was gone cuz I couldn't put it down!”