A funny thing happened on the way to promote my cluetrail writing class Mystery Bones. I teamed up with a friend who is promoting it for my and I swear this women has a killer talent. She's found an archive of old photos and is able to rattle off scenarios as they run down her fingers and escape via the keyboard onto the screen. Here's a sample of her stuff below. And oh yeah - if you're in the Canmore AB area on November 2 and 3, sign up for my class. 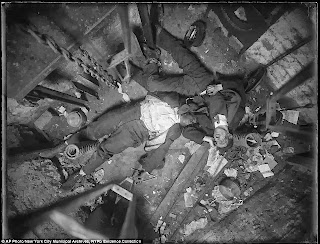 The building was old and well used, and finally slated for demolition. Parts of the brick façade were crumbling away, and the memory of onions, garlic and spices mixed with the smells of dust and mildew in the hallways. Old mattresses and piles of trash said the building was now a refuge for the homeless and characters of ill repute.

This did not discourage the two men who entered the building that day. Climbing the stairs to one of the higher floors they found the elevator doors open, and the elevator itself above them. They leaned in, curious to view the inner workings that few get to see.

Suddenly something large and hard hit them both in the back, sweeping their feet from under them and sending them both to their deaths in the bottom of the concrete pit.

Learn how to lay a clue trail and plot a murder at the Mystery Bones Workshop – Canmore – November 2 & 3. Visit http://mysteryfactory.com/mystery-bones
for more info.

And stay away from open elevator shafts. 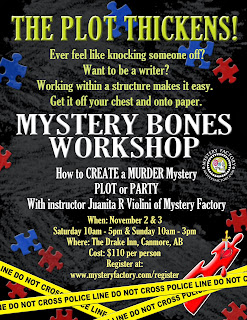