Mystery Writing Tips from a Master 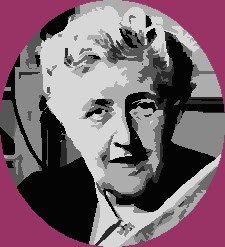 Everything I learned about planting clues for a 'fairplay' murder mystery I learned by studying and dissecting the works of the most brilliant cluemaster of all time, Agatha Christie. 'Fairplay' means that the reader has all the same information as the detective, and could solve the mystery, if they were clever enough. Writing performance corporate mysteries for nearly twenty years, honed my skills in this regard. Here's one priceless gem from Dame Agatha, hidden deep within one of her novels. If memory served me correctly, it was The Mirror Cracked From Side to Side.

"What you have to account for is if one person did see something why didn't that person say so? ... Possibility one - The person who saw it didn't realize what they had seen. That would mean, of course, that it would have to be rather a stupid person. Someone let us say, who can use their eyes but not their brain.

It might have been a person whose action in putting something in a glass was natural. It would be quite possible, audacious but possible, for someone to pick up that glass which as soon as it was in his hand or her hand, of course, would be assumed to be his or her own drink and to add whatever was added quite openly. In that case you see, people wouldn't think twice ... it would be a gamble, a risk, but it could happen.

Possibility three ... Somebody saw what happened and held their tongue deliberately ... if so, it's a very dangerous thing to do. - Agatha Christie.
Posted by Juanita Rose Violini at 8:09 AM

Thanks for sharing those tips. They all make such perfect sense.

Yes, if you want to write a Fair Play, it's important to get all the tricks down.