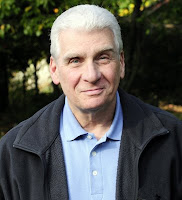 Today I invited the very talented Marshall Karp to be a guest blogger on Criminal Minds at Work. Marshall, as you're about to find out, has a great sense of humor, and if you're a writer you're going to be able to relate to this post. ~CKT
The Author Tech Support Hotline has now been outsourced to India
For those of you who are not published authors, let me tell you one of the great perks that comes with the territory. A 24/7 hotline you can call whenever you run into a writing problem.

Now I’m not talking about “Writer’s Block.” That’s a term invented by the media, and it is totally fictitious like The Abominable Snowman, Erectile Dysfunction, or Dick Cheney’s so called “heart.”

Author Tech Support is for writers who just get a little stuck. It has always been staffed by English majors at universities in New York, Chicago, and Boston. But the economic apocalypse has forced Author Hotline to outsource its help desk to India. My recent phone call was a disaster.

I press 3 and a man with a thick Indian accent comes on.

AUTHOR HOTLINE: Hello, this is Gary. What is your name please?

AH: Ohh, my father’s name is Chandrashekhar. How can I help you?

MK: I killed a woman in Chapter 5, and I thought I knew who the murderer was, but it just doesn’t work. Now I’m on Chapter 47, and I need some help figuring out who the real murder is.

AH: Oh yes, figuring out who the real murderer is. OJ Syndrome. Are you sure this woman is really dead?

AH: A lot of authors call Tech Support, but they don’t check to see if the character is really dead. She could be working late at the office. Can you please take another good look at Chapter 5 to see if she’s really dead?

MK: She’s dead. I checked before I called. I need a murderer.

AH: What are my options?

MK: Well, how about the local butcher? She was stabbed with a knife…

MK: Mid sixties, white hair, big happy smile. Nobody would ever suspect him.

AH: Too lovable. Women readers will hate you. Try using a jealous co-worker.

MK: I don’t have a jealous co-worker.

AH: There was one in the box with the original software.

MK: I didn’t save the box. I figured if I had a problem, you would help me.

AH: Sir, I’m trying to help. Why don’t you try rebooting your PC?

AH: A Mac? I’m only qualified for PCs. I’ll have to transfer you.

MK: No! I don’t want to start over again. Don’t transf…

Marshall Karp is the author of The Rabbit Factory, Bloodthirsty, Flipping Out, and some mildly amusing blogs like the one above, which reside at http://www.lomaxandbiggs.com/.

Posted by Cheryl Tardif at 3:00 AM