Memorial for Cheryl Kaye Tardif's brother, Jason Kaye, and for others who died in Edmonton 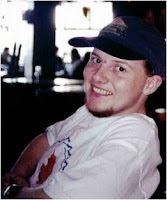 On January 7, 2007, a special memorial service was held at Hope Mission in Edmonton, Alberta, for all people who had died on or around Edmonton streets and those who had used the services of Hope Mission.

And Jason Kaye was one of them.


Below is the eulogy and announcement made by Jason's sister and Edmonton author, Cheryl Kaye Tardif.

My name is Cheryl Kaye Tardif and I am the sister of Jason Kaye, Edmonton’s third homicide last January. Jason was a young man, only 28 when he died, who struggled with alcohol and depression. We tried to be there for him and never gave up hope that he’d turn his life around. Until he was murdered and left to die alone.
As a teen, Jason was a red-headed computer genius, who had so much potential. As an adult, he was always the jokester and would give his shirt off his back to help a friend. Since his death, we have heard so many heartening stories from some of his wonderful friends, and this comforts us to know that he was not alone, even though he had cut himself off from family.

It was difficult for the police to track us down, since my last name is not the same and we’re the only family Jason had in Edmonton. But Jason had told his friends that his sister was an author who had written a book about whales. That’s how the police found me. Whale Song, a novel, was the only book of mine that my brother had ever read, and this April it will be re-released, bigger and better, with a special dedication to my brother. Whale Song is Jason’s book now...

Hype1.com covers everything related to Entertainment and Nightlife, such as Nightclubs, Event Photos, Restaurants,Special Events, Event Tickets, Maps, Photos, Dating, Hotels, Hot Spots, Event Promoters, Fashion Shows and More! On Hype1 you can plan your night by viewing thousands of nightclubs, events and restaurants across many cities in the world. Remember , going out is easy, knowing where, is not.